Square Enix along with developer People Can Fly released a new trailer this week for Outriders showing the game off on PC. The video, which you can watch down at the bottom, has over six minutes’ worth of information as the company gives you the rundown of what it will be like playing it on PC. What’s more, we now know a free demo of the game will launch across the board on February 25th, 2021. The game will launch on the PS5, Xbox Series X/S, and PC on both Steam and the Epic Games Store on April 1st, 2021, with a Stadia version coming out later this year. Enjoy the video! 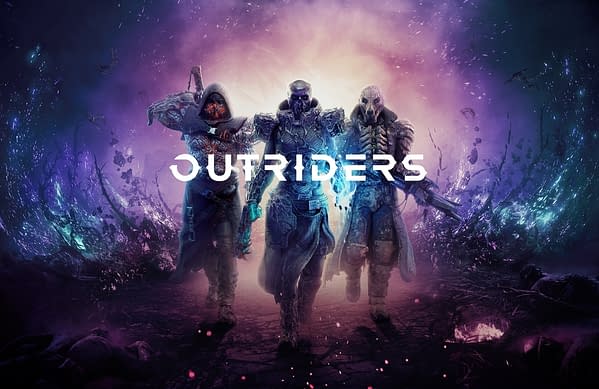 A look at the Legendary artwork for Outriders, courtesy of Square Enix.

As mankind bleeds out in the trenches of Enoch, you’ll create your own Outrider and embark on a journey across the hostile planet. With rich storytelling spanning a diverse world, you’ll leave behind the slums and shanty towns of the First City and traverse forests, mountains and desert in the pursuit of a mysterious signal. Combining intense gunplay with violent powers and an arsenal of increasingly twisted weaponry and gear-sets, Outriders offers countless hours of gameplay from one of the finest shooter developers in the industry – People Can Fly.

Outriders‘ brutal and bloody combat combines frenetic gunplay, violent powers and deep RPG systems to create a true genre hybrid. Discover the hostile planet of Enoch as you embark on a journey to the source of a mysterious signal. Play single-player or join up to two friends in drop-in drop-out co-op as you tackle the horrors of a hyper-evolved planet. Create and customise your own Outrider and choose from four unique classes each with its own skill tree to define your own playstyle. Customise and upgrade your Outrider with countless items of mod-able guns and gear, as you leave humanity behind.

Fortnite Crew: How to Get the ‘Members Only’ Exclusive Emote