HyperX and Allied Esports revealed this past week that they have renewed their naming rights to the esports arena in Las Vegas. The HyperX Esports Arena Las Vegas, located at Luxor Hotel & Casino along the famous strip, hasn’t seen a lot of action during 2020 due to the COVID-19 pandemic. Leaving some to wonder if the building might become either abandoned or if the name on the side of it would be getting a facelift. Well, during CES 2021, those thoughts were put to rest as the name will stay the same while they wait to get the full usage out of the building when things get back to normal. Essentially, this will operate in many ways like the Esports Stadium in Arlington, where it will become an event hub designed to cater to whatever games decide to call it home for a weekend event. Here’s some added info from the announcement this past week. 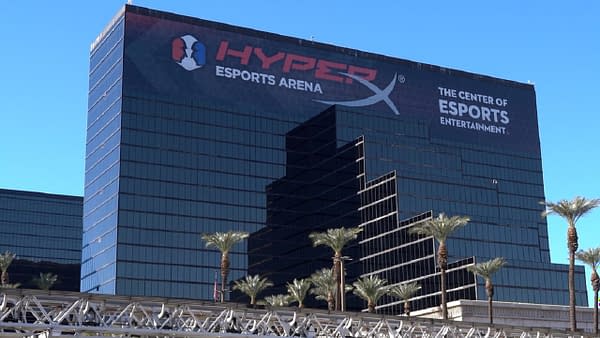 A look at the HyperX Esports Arena Las Vegas, courtesy of HyperX.

“HyperX is excited to retain the naming rights sponsorship of the HyperX Esports Arena Las Vegas as a sign of our commitment and dedication to esports and the gaming community,” said Paul Leaman, Vice President, HyperX EMEA “Allied Esports is a key partner for us, proving their ability to be a best-in-class esports destination, and we look forward to continued success with them.”

“HyperX has been an incredible naming rights partner for our flagship property, bringing authenticity and credibility to the most recognised esports venue and production facility in the world,” said Jud Hannigan, CEO of Allied Esports. “We are thrilled to extend this landmark alliance as we work together to continue delivering exciting experiences and content for customers and partners alike.”

With its unique modular design, elevated main stage, two-story LED video wall and one-of-a-kind HyperX Hype Tunnel, HyperX Esports Arena Las Vegas is the ultimate setting for players to test and showcase their skills. The arena’s weekly tournaments and broadcasts, including Frags featuring Fortnite and Saturday Night Speedway featuring Mario Kart 8, draw competitors from across the west coast and have become a benchmark for community events and grassroots growth for up-and-coming players. In addition to its world-class gaming hospitality, HyperX Esports Arena Las Vegas’s versatile production capabilities continue to be at the centre of many online esports and entertainment productions throughout the world.