&#039;Fortnite&#039; Predator apartment location map: How to find and unlock the skin

The Predator has come to Fortnite! The whole gimmick of Fortnite Chapter 2, Season 5 is that a character called Agent Jones is bringing expert hunters from several different universes to the world of Fortnite. Like The Mandalorian, Kratos, and Master Chief before it, this crossover makes a ton of sense as The Predator is one of the most famous “hunters” in pop culture.

While Fortnite fans are already excited by official teases for a crossover with The Terminator, don’t forget to defeat The Predator during a battle royale match to unlock the skin. Even after you defeat Predator, you’ll need to complete challenges like finding its apartment.

If you want to find The Predator, unlock his skin, and then complete the challenge where you must find his apartment, this is where you need to be looking.

Where to find The Predator in Fortnite?

The first thing Predator fans will want to do in Fortnite is find him during a match and kill him. This will fulfill the “Defeat the Predator” quest and unlock the skin for you. The Predator can be found roaming around the fenced-in Stealthy Stronghold. He/she will attack players that roam around the area. 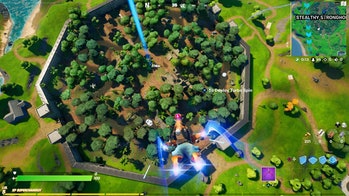 Dive down to this northern enclosure to find and defeat the Predator.Epic Games

READ  Where to find the purple pool at Steamy Stacks in Fortnite Chapter 2, season 5

The Predator will eventually come out of hiding and attack players. That will be your opportunity to strike back and kill it. It can be a tough fight, and you’ll likely be competing it with a lot of opposing players.

Still, if you manage to take The Predator down alone or with a team, you’ll get the skin, the Predator’s Cloaking Device that lets you use Predator’s cloaking ability for 30 seconds, and the ability to complete other Predator challenges. As such, it’s worth dropping into Stealthy Stronghold if you can at the start of a Fortnite match.

Where is The Predator’s Apartment in Fortnite?

Once you defeat The Predator, you can equip that skin and complete its Jungle Hunter challenges. One of these tasks players with finding the Predator’s Apartmant on the Fortnite map. To find Predator’s apartment, you’ll want to visit Hunter’s Haven. 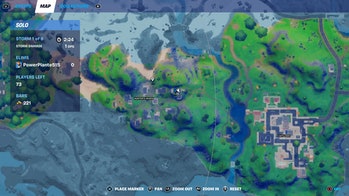 The Predator’s apartment is in northeastern Hunter’s Haven.Epic Games

This area, which is south of the Zero Point, is home to several small buildings with apartments inside them. One of these, which is specifically located on the northeast side of Hunter’s Haven and is perched on top of a cliff, belongs to the Predator.

To complete this challenge, make sure you have the free Predator skin equipped and drop above Hunter’s Haven. Find Predator’s Apartment in the location explained above. Players will know they are in the right place if they see the Predator’s Gear laying around, including some high-tech, alien computer equipment and a chair seemingly taken from its ship. There are also some other strange relics lying around.

After standing in there for a couple of seconds, the “Visit Predator’s Apartment in Hunter’s Haven as Predator” challenge will be completed. Overall, it makes for a really interesting series of themed challenges for players.