Asus is one of the leading brands when it comes to gaming equipment and its monitors are some of the best options available.

The best monitors feature high resolution and refresh rates to keep up with competitive titles. Performance gaming monitors should also have adaptive sync technology to reduce screen tearing. These performance features are great, but any good gaming monitor must also have decent color accuracy.

Asus manufactures everything from motherboards to graphics cards and laptop cases. The company also makes some of the best gaming monitors under the ROG and TUF Gaming brands.

The ROG brand is synonymous with top-of-the-range gaming equipment and has a distinctive style and logo. The TUF Gaming brand started as a more durable product line made for hard use, but it has evolved into a more budget-friendly compared to the ROG line.

Here are some of the best Asus monitors available today. 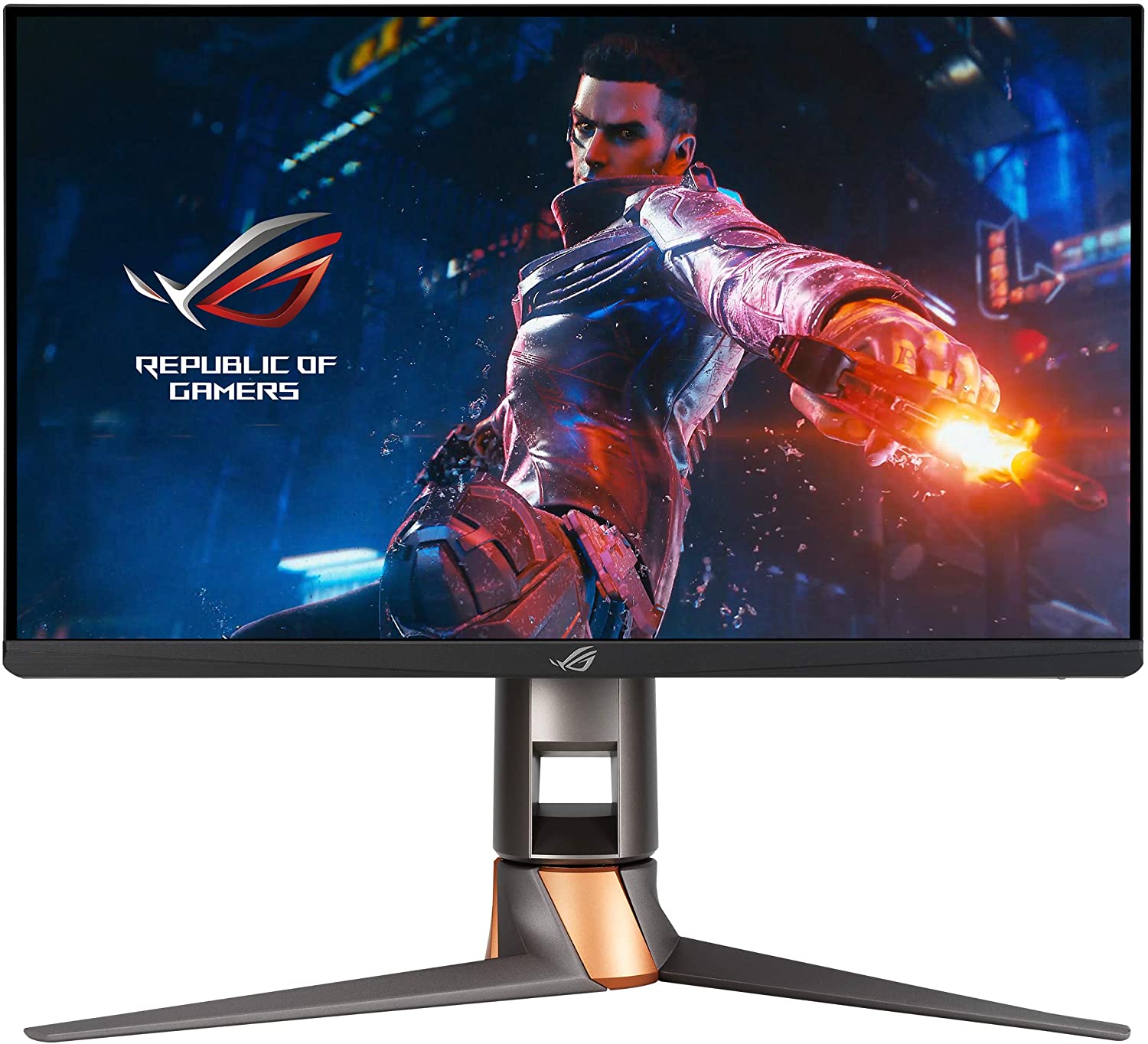 The Asus ROG Swift PG259QN is at the top of the list because of its exceptional features. It’s the world’s first 360Hz monitor, but it’ll be a challenge to notice the difference over a 240Hz monitor. This monitor has Full HD 1920×1080 resolution with a quick 1ms grey to grey (GtG) response time and G-Sync compatibility. There’s no 4K, but the picture quality is excellent, thanks to the HDR10 compatibility.

The PG259QN has flexible and can pivot  90-degrees, swivel 25-degrees from left to right, and there’s a vertical tilt from negative five degrees to 20 degrees. The spiral stand is similar to other ROG monitors but the massive RGB logo makes it stand out. When it comes to connectivity, there’s a single USB 2.0 port, two USB 3.0 ports, a DisplayPort 1.4b slot, and a 3.5-millimeter jack. The ROG Swift PG259QN isn’t cheap, but it’s one of the best options if you’re looking for the edge in Call of Duty or VALORANT. 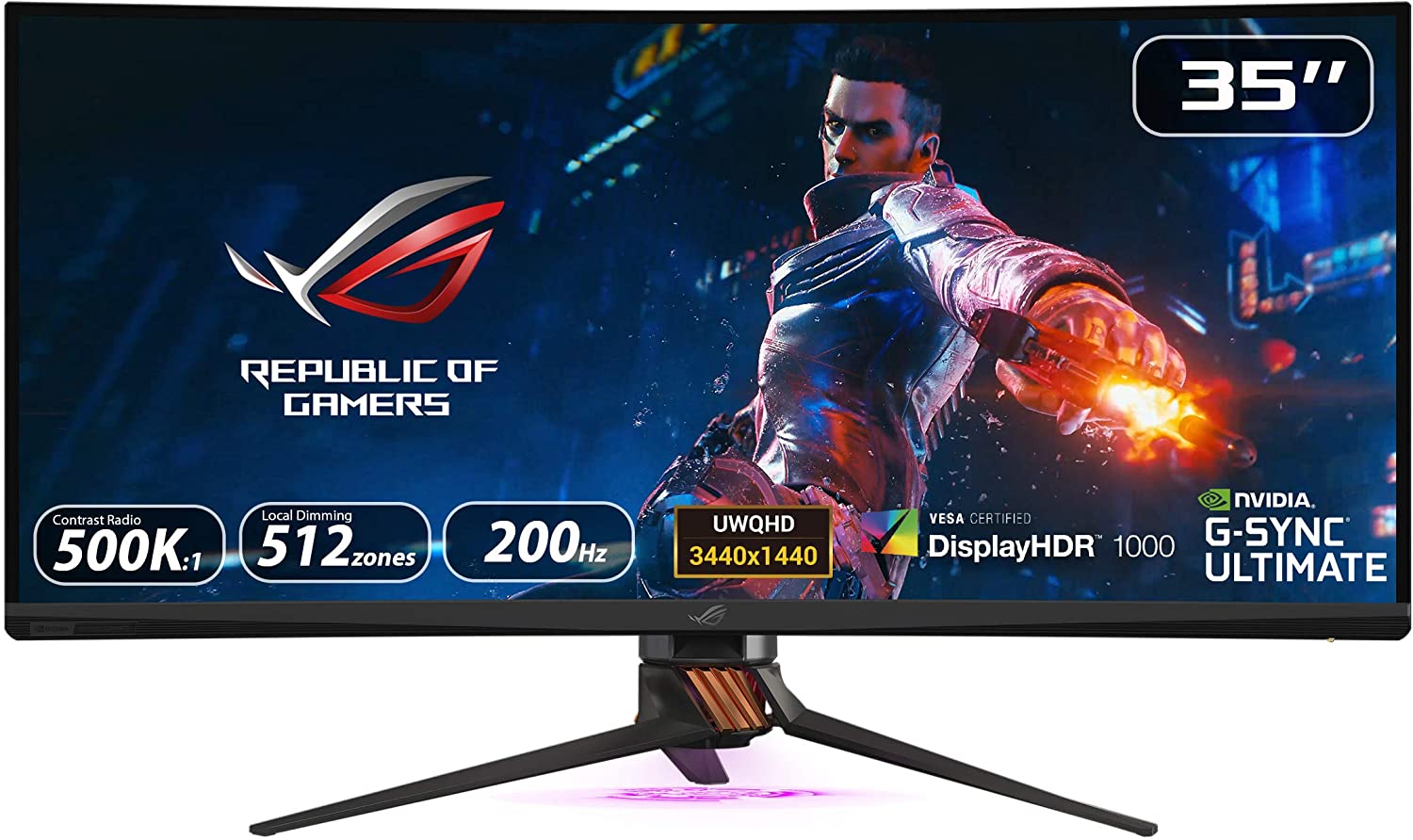 Casual players looking for a massive screen and immersive experience will prefer the Asus ROG Swift PG35VQ. This 35-inch curved monitor uses UWQHD 3440×1440 resolution with a 21:9 aspect ratio. Compared to most ultrawide monitors, it has an overclocked refresh rate of 200Hz. It can’t match the 360Hz of the ROG Swift PG259QN, but it’s more than enough for most gamers. Nvidia G-Sync is also included and works with your graphics card to reduce screen tearing.

This monitor has 512 local dimming zones and Quantum-dot technology to deliver outstanding picture quality whether you’re playing MOBAs like League of Legends or fast-paced shooters like Overwatch. It comes with most standard ports, including an HDMI 2.0 port, a DisplayPort 1.4b, two USB upstream ports, and a single USB downstream port. Upstream ports are used to connect your monitor to your PC, and downstream ports connect your monitor to other USB devices. There are also two built-in four-watt speakers and a 3.5-millimeter jack. The speakers barely do the job, and most players will likely want to use a headset. Ultrawide monitors aren’t the best for watching movies, but they have unparalleled immersion when it comes to games. The Asus ROG Swift PG35VQ is a great choice if you have a very high budget. 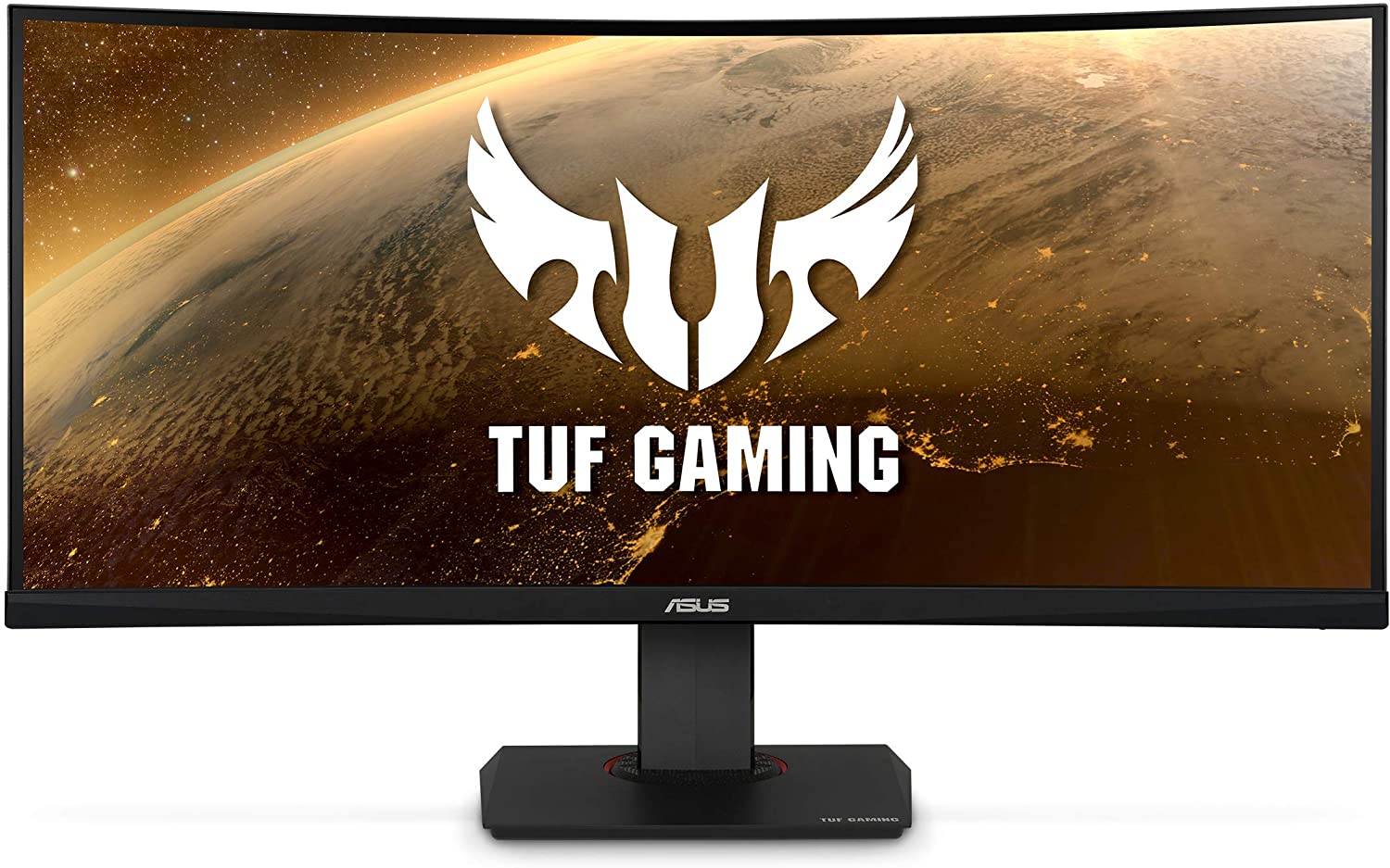 The Asus TUF Gaming VG35VQ offers the same size as the PG35VQ for a fraction of the price. It’s also a 35-inch curved monitor with 3440×1440 resolution and a 21:9 aspect ratio. You also get AMD Freesync compatibility, and Nvidia cards 10-Series and up are also supported. One of the cost-cutting measures is the 100Hz refresh rate. It isn’t the fastest but should handle popular games like Apex Legends and Fortnite smoothly.  The 1ms response time is on par with more expensive rivals.

One of the great features for this price point is the dual HDMI ports. There’s also a DisplayPort 1.2 and two USB 3.0 ports. There’s no RGB lighting like the ROG line, but it looks clean with the TUF Gaming logo at the back. The VG35VQ offers a bit more value than the ROG Swift PG35VQ, but the features might not be enough for some enthusiasts. 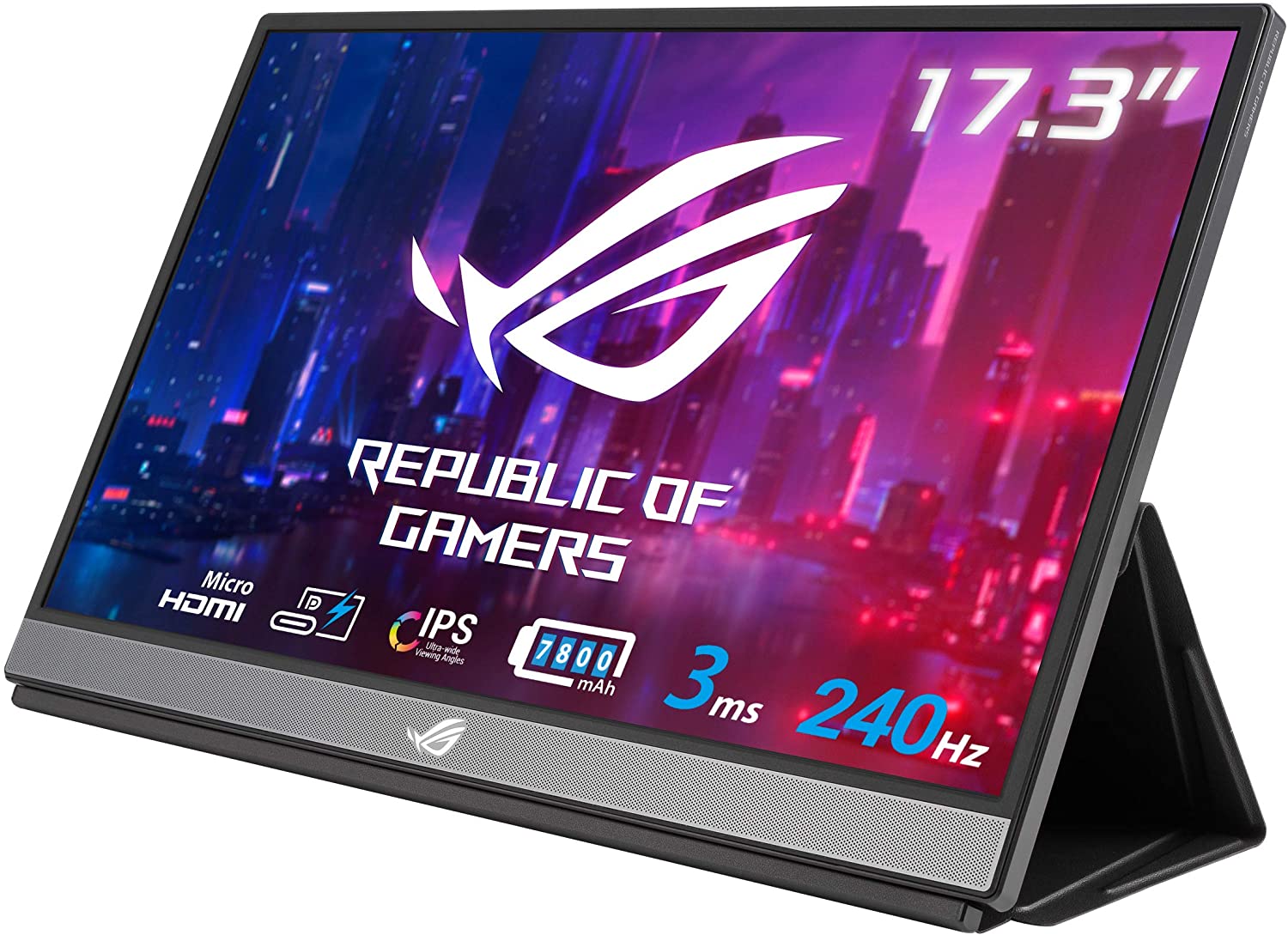 The Asus ROG Strix XG17AHPE is the perfect solution for people who like to game on the move. Asus’ 17.3-inch portable monitor is compact enough to fit into your laptop case but still manages to have great performance. This monitor is only 0.4-inches thick and manages to pack Full HD 1920×1080 resolution with a 240Hz refresh rate and a 3ms response time.

The gamer-centric features include five overdrive levels, Freesync compatibility, a GamepPlus menu, and a GameVisual mode. The GamePlus mode has settings for your crosshair and display alignment, and the GameVisual mode optimizes the picture for different game genres like FPS or racing.

You’ll never have to worry about connectivity because it’s powered through a USB-C port and comes with a USB-C to USB-A adapter. There’s even a built-in 7,800mAh battery, so you can use the monitor for almost three hours without charging it.  The price is no joke and is only worthwhile if you need to be mobile. For everyone else, a conventional screen is probably a better option. 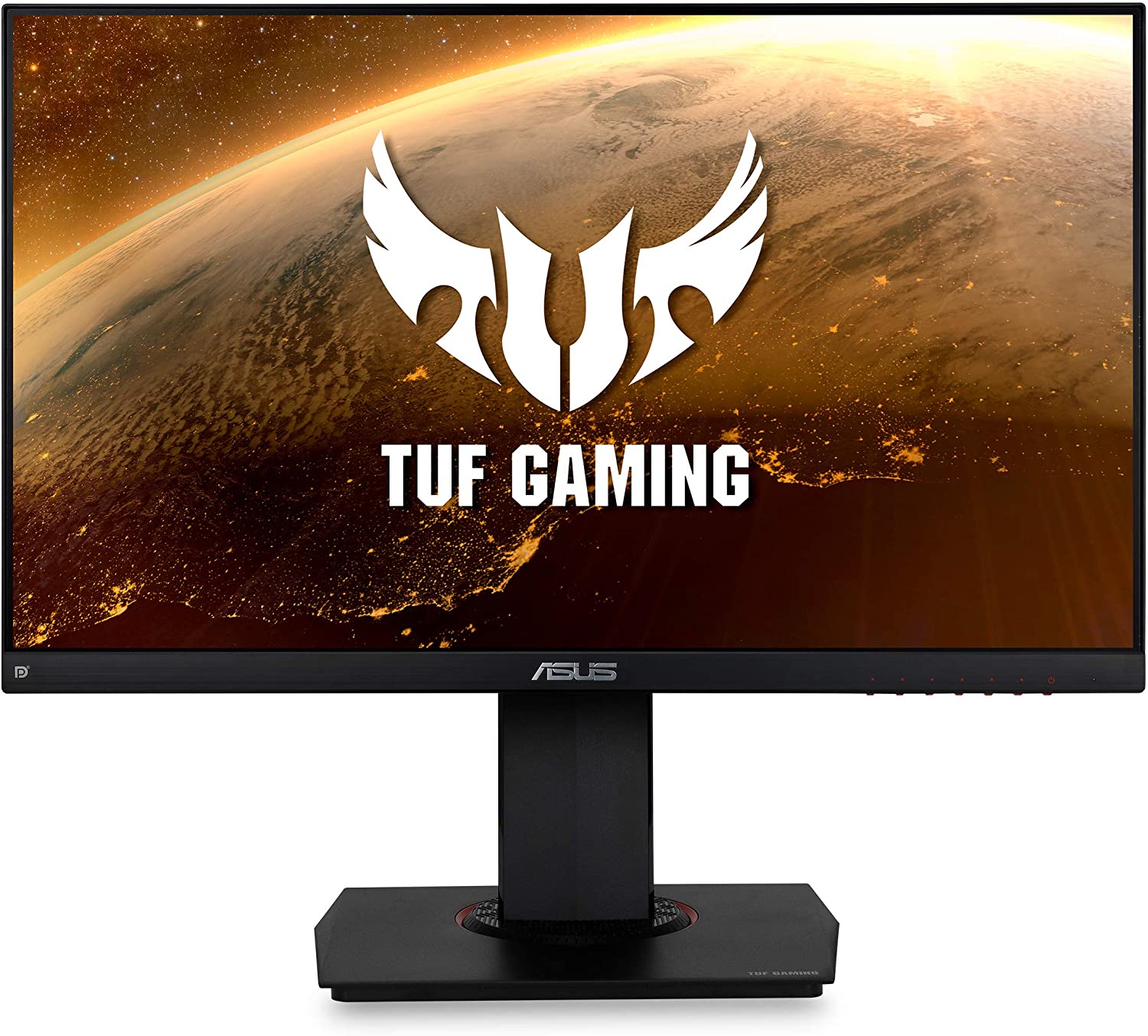 Check out the Asus TUF Gaming VG249Q if you need a gaming monitor on a limited budget. This 24-inch monitor has Full HD 1920×1080 resolution with a 144Hz refresh rate. It’s advertised with a 1ms Moving Picture Response Time (MPRT), which equates to a real-world response time of up to 4ms.

Asus had to cut costs somewhere, so connectivity options take a hit on this model. There are no USB ports, but you get an HDMI 1.4 and DisplayPort 1.2 port along with a 3.5-millimeter jack and a VGA connection. The two-watt speakers don’t have the best sound but are there if absolutely needed. This monitor isn’t flashy, but it can still tilt, pivot, and rotate to portrait mode. The VG249Q might not be pretty, but it offers great value. 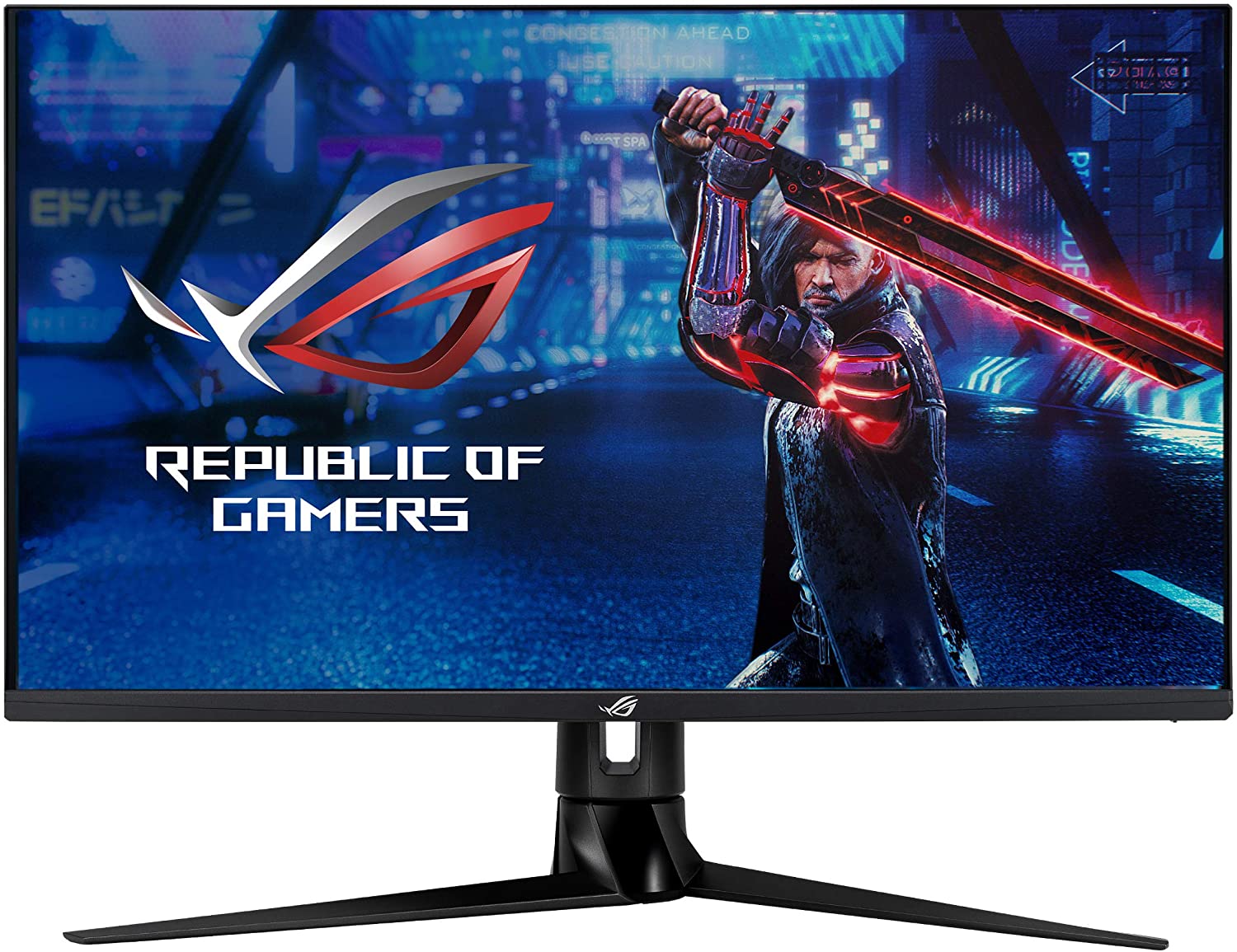 The ROG Swift PG329Q is perfect for playing games and watching movies because of its massive size and outstanding picture quality. It has a 32-inch IPS screen with WQHD 2560×1440 resolution. For such a huge screen, it still has an impressive 175Hz refresh rate and quick 1ms GtG response time. There’s also adaptive sync technology called Asus Extreme Low Motion Blur Sync (ELMB) that’s compatible with both G-Sync and Freesync graphics cards.

Other great features on the ROG Swift PG329Q include HDR Mode, Shadow Boost, and GamePlus. Thanks to the thin bezels on the top and sides, it’s far more attractive than the TUF Gaming VG249Q. The mammoth RGB lit ROG logo on the rear can sync with your mouse or keyboard using the Aura app. The ROG Swift PG329Q may be too big for some desks, but it delivers an immersive gaming experience with a solid refresh rate. 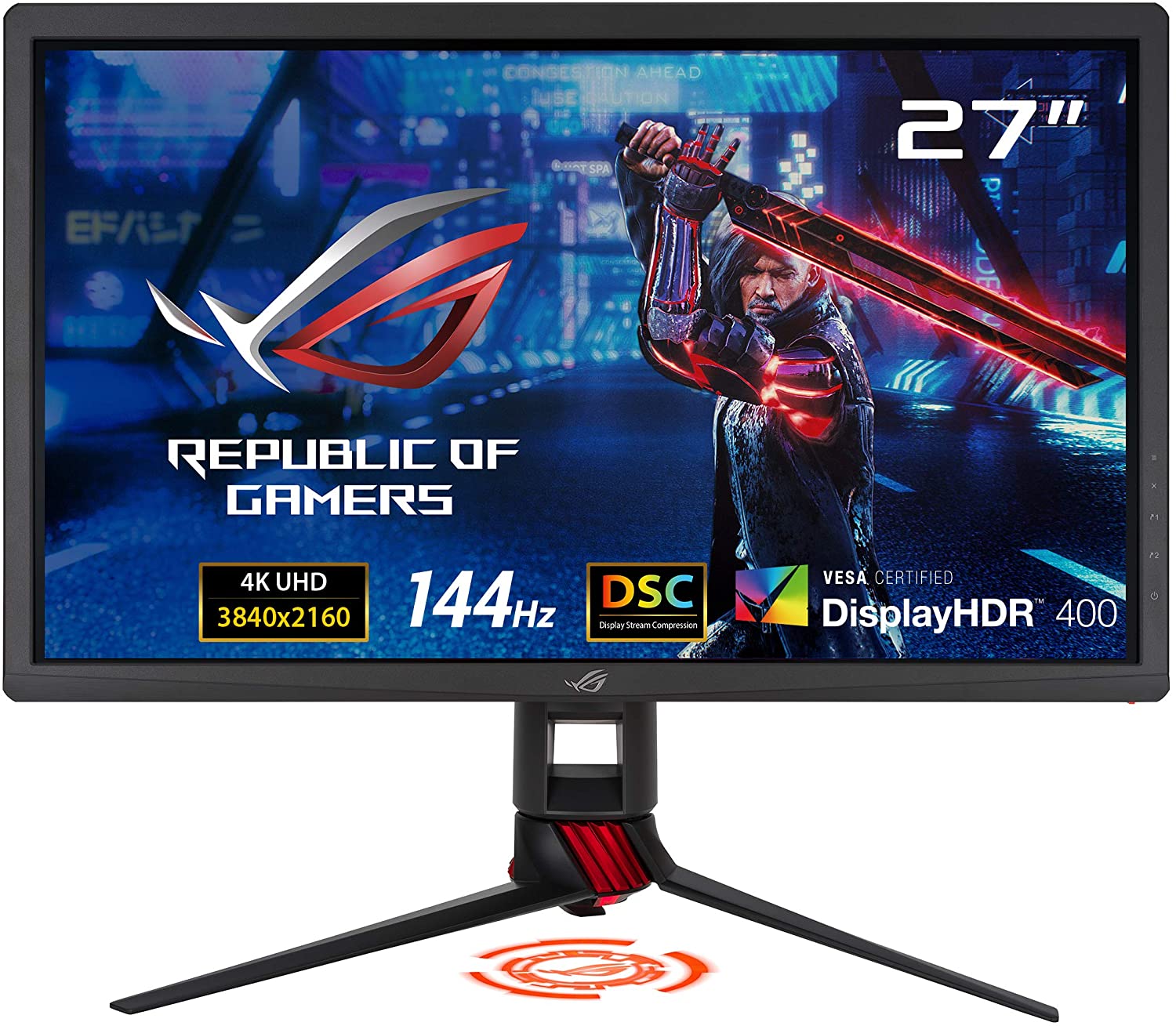 The Asus ROG Strix XG27UQ is a 27-inch IPS monitor with 4K UHD 3840×2160 resolution and 384 full-array dimming zones. For a 4K screen, it has an impressive 144Hz refresh rate and 1ms GtG response time. The OLED screen has crisp visuals no matter what game you’re playing, and the colors are vibrant thanks to the DisplayHDR 400 certification. This screen also has adaptive sync to eliminate screen tearing and is currently awaiting G-Sync certification.

The design is similar to the PG329Q, but the bezels are quite thick. It shares the gigantic RGB logo on the rear and also has a light signature that shines on your desk while you play. The signature light can be distracting and looks a bit gimmicky. The ROG Strix XG27UQ has all the adjustment features you can ask for, including 120-millimeter height adjustment, 90-degree pivot, and tilt and swivel features. You also get two HDMI 2.0 ports, two DisplayPort 1.4 ports, two USB ports, and a headphone jack. The ROG Strix XG27UQ costs a fortune, but it’s one of the best gaming monitors you can buy.

Best gaming keyboards 2020 - find the right one for you