Home » FBNR Guides » Do we have to move away from the fun part of WandaVision?
FBNR GuidesFortniteLatest News From Fortnite

Do we have to move away from the fun part of WandaVision?

My most unpopular Marvel Cinematic Universe opinion, which I’ve held onto strongly since 2015’s Age of Ultron, is that I love Scarlet Witch and Vision. MCU fans don’t necessarily hate them per se, but in the larger framework, they play such a small role that they’re very few people’s favorites. I once got into a fight at a party with someone who said the two were pointless additions to the MCU narrative. (At my own party, too!)

The reasons I was first drawn to them were simple: I love witches, and I love robots. (The fact that Paul Bettany is so cute doesn’t hurt.) I enjoy them individually, but as a ship, I also like the concept of two alienated outsiders finding solace with each other.

WandaVision feels like a vindication for my fandom. At last, two of my most beloved MCU characters, who only ever got teeny-tiny scenes in bigger, more grandiose stories, have a show of their own. The first three episodes made me even more triumphant — this fun, slice-of-life take on this self-proclaimed “unusual couple” is exactly what I wanted.

But the Disney Plus show is at the precipice of spiraling into big, heavy plot-thingies. Fans are clearly looking forward to the reveal, the answer to the question of how this show fits into the grander scheme of the MCU. But can we take a moment here? Why oh why can’t we stay with the fun stuff just a little longer? While WandaVision’s heavier, overarching plot is still unfolding, the first three episodes are riffs on different eras of sitcoms. Each contains some hints at the larger situation, but mostly, the episodes play out like specific classic-era TV comedies: Wanda and Vision prepare a meal for Vision’s boss, they partake in a community talent show, they prepare the nursery in their groovy home. In essence, WandaVision is giving the MCU the Coffee Shop AU I’ve waited for so desperately.

In the early days of Marvel Cinematic Universe fandom, one of the most popular settings in fanfiction and fanart was the Avengers Tower. Writers and artists alike used the concept of all the Avengers living together to imagine downtime between the cast — Thor devoured Pop Tarts, Clint built nests in the rafters, everyone snuggled up and played their Nintendo DSs. My early days of enjoying MCU content was shaped by this: all I wanted, really, was an extended cut of The Avengers’ post-credits shawarma scene, where the worn-out heroes all share a bite and talk about their feelings.

With few exceptions — Thor’s one-off roommate Darryl comes to mind, as does the first half of Spider-Man: Far From Home (aka Peter Parker’s European Vacation) — the ever-churning plot wheels of the rumbling MCU machine rarely allow for off-duty scenes. And it’s a pity, because these moments aren’t just cozy one-shots; they often do the most character work. In fact, Wanda and Vision’s only real couple moment was in one of these smaller, less frenzied sequences. 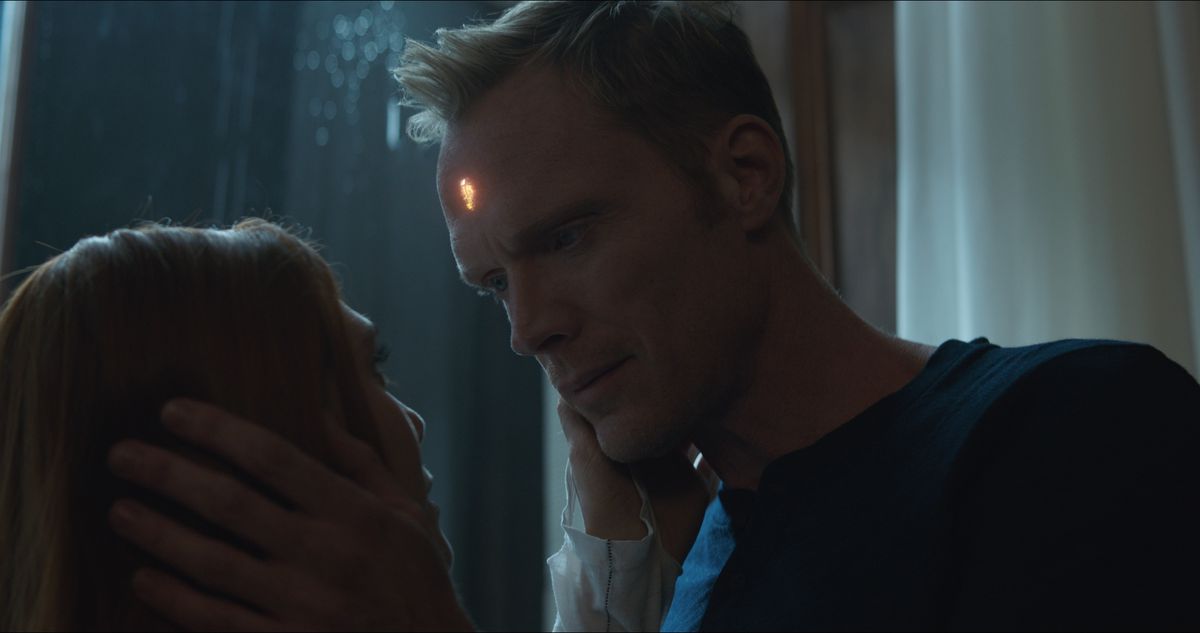 I like filler episodes where the characters hang out and relationship dynamics are explored. I unabashedly prefer sitcoms over hour-long dramas, because of the time they spend on characters’ more mundane moments. Any time a story takes a moment to breathe, it has a chance to examine the characters at their core, in a time when they’re not pushed along by a Big Bad’s evil machinations or trying to save the world. These quiet moments show us who they are when they don’t need to be heroes. With an overwhelming juggernaut like the MCU, with its continually expanding cast, some characters slip through the cracks. It’s hard to remember what they’re all fighting to protect if we only ever see them fighting.

Right now, WandaVision is a chance to slow down. Wanda and Vision’s chemistry is finally getting a moment to shine, beyond a few scenes tucked into other people’s movies — and it turns out, they’re pretty funny people who love each other a whole lot! When they aren’t running for their lives or fighting Thanos’ minions, Wanda and Vision get to explore the weirdness of their relationship. The setup of the show means that’s being done through predetermined sitcom clichés, but that just bolsters their peculiar quirks and personalities. 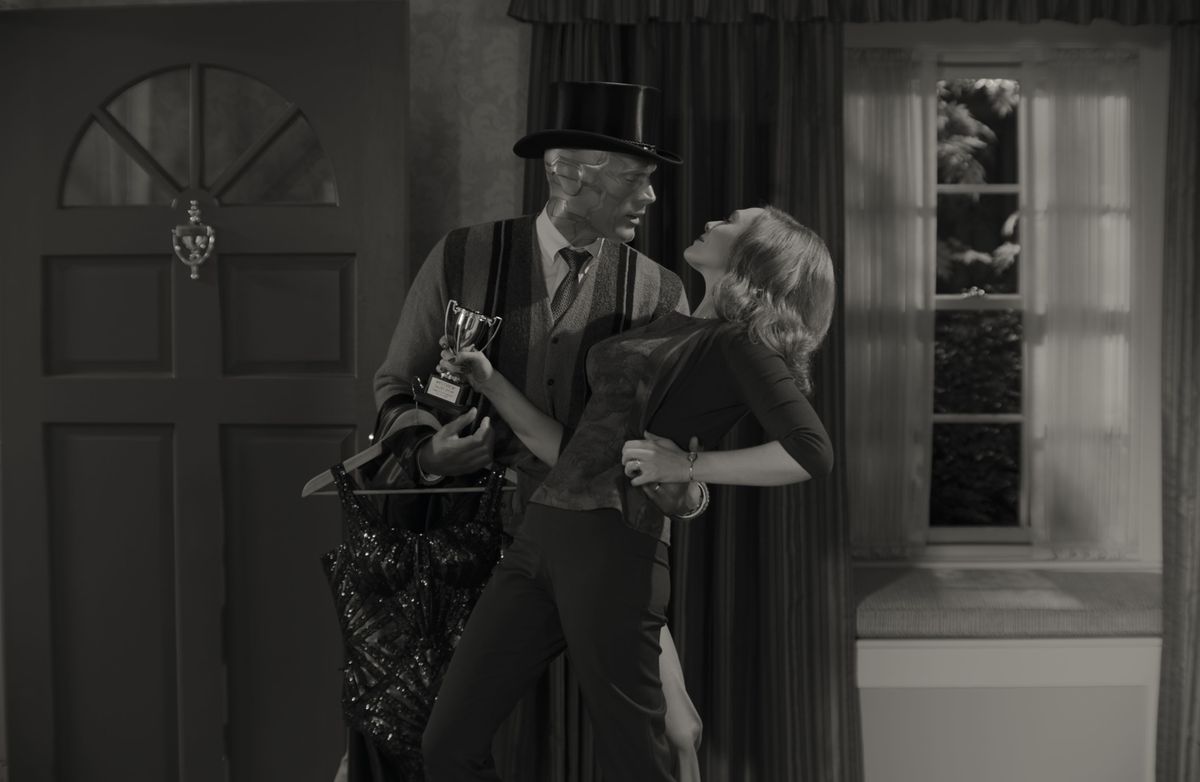 The sitcom plotlines of each episode might be familiar territory to viewers, but these characters are experiencing them for the first time. There’s a reason Coffee Shop AU is a popular fanfiction trope, and that Avengers Tower was the baseline setting for a lot of Avengers fan content — using an established framework from a genre we haven’t seen the characters in before allows for new takes on both the story and the characters themselves.

And I’m not just enjoying WandaVision’s fun hijinks (though let me emphasize, I do love fun hijinks); it’s more that it’s exciting how Wanda and Vision are finally getting a chance to sparkle. I’ve always loved them for simply being a witch and a robot — misfits even in a world full of super-soldiers and alien gods, struggling to relate to the rest of their peers because they don’t fit in. Now I love them because they’re quirky, earnest, and witty, a pair of odd people who’ve found each other and are just trying to be happy.

Each successive episode of WandaVision so far has revealed more hints of what’s behind the curtain of the show’s sitcom reality. We know at this point that something is amiss, that Wanda is deliberately not letting on how aware she is that she’s living in a fantasy, and that some big cool thing will eventually lead WandaVision perfectly into the Doctor Strange sequel. As far as I’m concerned, though, this fun part of the show is the important part — it’s already done more for their characters than three movies ever did. I look forward to the grand reveal, but I wish we got a bit more time to rest. Because once the bigger plot stuff kicks into full gear, I have a feeling we won’t get this sort of downtime again.

The first three episodes of WandaVision are available to stream on Disney Plus.