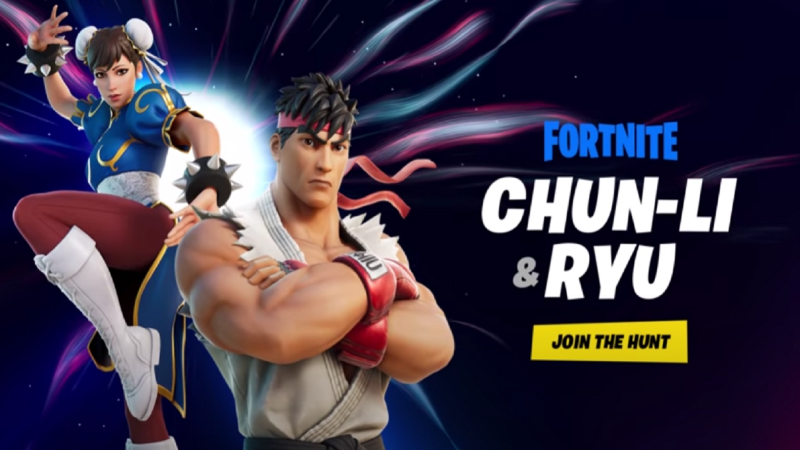 Fortnite has been embracing crossover character skins for ages now, and two big names are about to join the cast! More information is dropping tomorrow evening at 7:00 p.m. Eastern Time via official Epic channels, but for now we’ve got a spiffy new reveal trailer showcasing Ryu and Chun-Li from the Street Fighter franchise. After Master Chief, Kratos, and many others have entered the Fortnite universe as skins, this is hardly surprising, but it’s always great to see additional faces from other games come into the universe! Check out their debut trailer above!

Ryu’s penchant for Hadoukens and Chun-Li’s furious flurry of kicks have been staples of the fighting game scene from when we would gather around the one arcade unit in the Walmart mini-arcades and stack quarters on the side of the machine, eager to dragon punch and kick our enemies into oblivion while the crane game chirped noisily in the background. While those days can never return, we can now play as some of our favorite Street Fighters in Fortnite. At this point, I don’t think any crossover could surprise me, with myriad names and faces joining Epic’s free-to-play foray on a regular basis.

Game Informer reviewed Fortnite back in 2018, and while many things have changed, the core battle royale experience stands strong. “The sheer replayability of Fortnite Battle Royale is one of its greatest strengths. Despite there only being one map, nothing ever plays out the same from game to game. Your learned experience about chest spawns, terrain, and weapon functionality carries over, but how these aspects intersect is fresh every time,” I said in my review. “Maybe you land with 10 other players in the middle of a house, forcing you to decide whether to book it to the next area or go Rambo, hoping to reap the rewards as the lone survivor of a grim melee. Maybe you get a great weapon right away, but wander into the middle of a skirmish between two snipers. Like Dota 2 or League of Legends, despite the single primary playspace, the rest of the variables mean that one map is more than enough.”

Are you planning to pick up the Ryu or Chun-Li skins? What do you think about the deluge of crossover skins? Let us know in the comments!