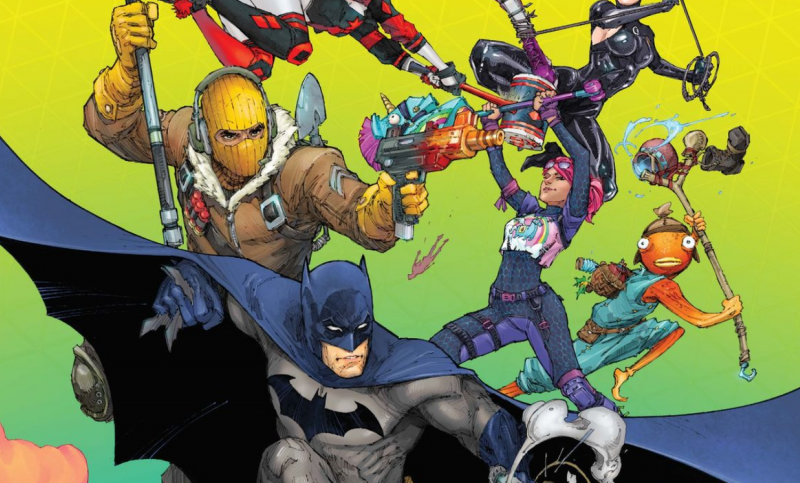 Fortnite and DC Comics have crossed over in the past, including giving players a chance to live out those fantasies of becoming key icons like the Joker, Cat Woman, and Batman himself, but now the two universes will meet again for a new adventure: a new comic series. The latest Fortnite x DC crossover is a new Batman comic series that will feature the battle royale title in an entirely different way.

While a crossover in itself isn’t at all surprising (seriously, the list of mashups is almost too long to count at this point), the fact that it’s via a new comic series is a little unexpected. The new comic series is called Batman/Fortnite: Zero Point and will offer six issues for a new storyline centering around yet another tear in reality.

A new rift rips Gotham’s sky asunder in the new miniseries and drops Batman dead center into an unfamiliar world. Batman invaded the game, now he’s invading the entire universe, as he tries to escape an endless loop of nonsensical chaos while meeting other characters from the Fortnite-verse like Renegade Raider, Fishstick, and more.

“When DC first approached me about doing a Batman/Fortnite series, I thought it would be a lot of fun,” said series writer Christos Gage. ”After speaking with Donald Mustard and discovering just how deeply we’d be diving into the secrets behind the world of Fortnite, I was amazed! This series will reveal things about Fortnite that have never been seen or heard before yet are very much part of the canon of the game.”

The new comic series will include a redeemable code for DC-specific Fortnite gear, including the Rebirth Harley Quinn outfit. For comic lovers who get all six issues, which means all six codes, they will also unlock a special Armored Batman Zero outfit and wear when vying for that Victory Royale.

READ  I wish The Legend of Zelda: Breath of the Wild had lower stakes

“I’m also looking forward to integrating other DC Super Heroes into the series, characters that Batman has existing relations with,” Gage continued. “It’ll be exciting to share with fans how these relationships will be reshaped in this new world. The art by Reilly, Christian, Nelson, and John is stunning, and my prediction is that this series will blow everybody’s mind, whether you’re a fan of DC, Batman, or Fortnite.”

You can check out the official website right here to learn more about the new miniseries with the Batman x Fortnite crossover comics ahead of the planned release for April 20, 2021.

Swing for the green 🏌️‍♀️ Grab the Teed Off Set in the Shop now! https://t.co/nXKFaiFuMV