Borderlands 3 is one the biggest exclusive gets for the Epic Games Store.

Borderlands 3‘s release on PC being locked to the Epic Games Store for six months was one of the early example demonstrating just how serious Epic is about building its PC platform.

Naturally, the terms of this agreement were not shared publicly, but thanks to the currently ongoing Epic Games vs. Apple trial, we have a better idea of how much money the deal cost Epic, and how well the game performed on the platform.

According to confidential documents the court made public, the Borderlands 3 deal cost Epic $115 million. This is broken down to $80 million as a minimum guarantee (advance) – i.e., money Epic is paying 2K Games regardless of whether or not the game manages to earn that figure on its own. This leaves $15 million, billed as marketing commitment, and $20 non-recoupable fees – essentially a fee for locking the game’s release to EGS.

The total of what the document refers to as the “Fully Loaded Borderlands 3 Deal” is $146 million. 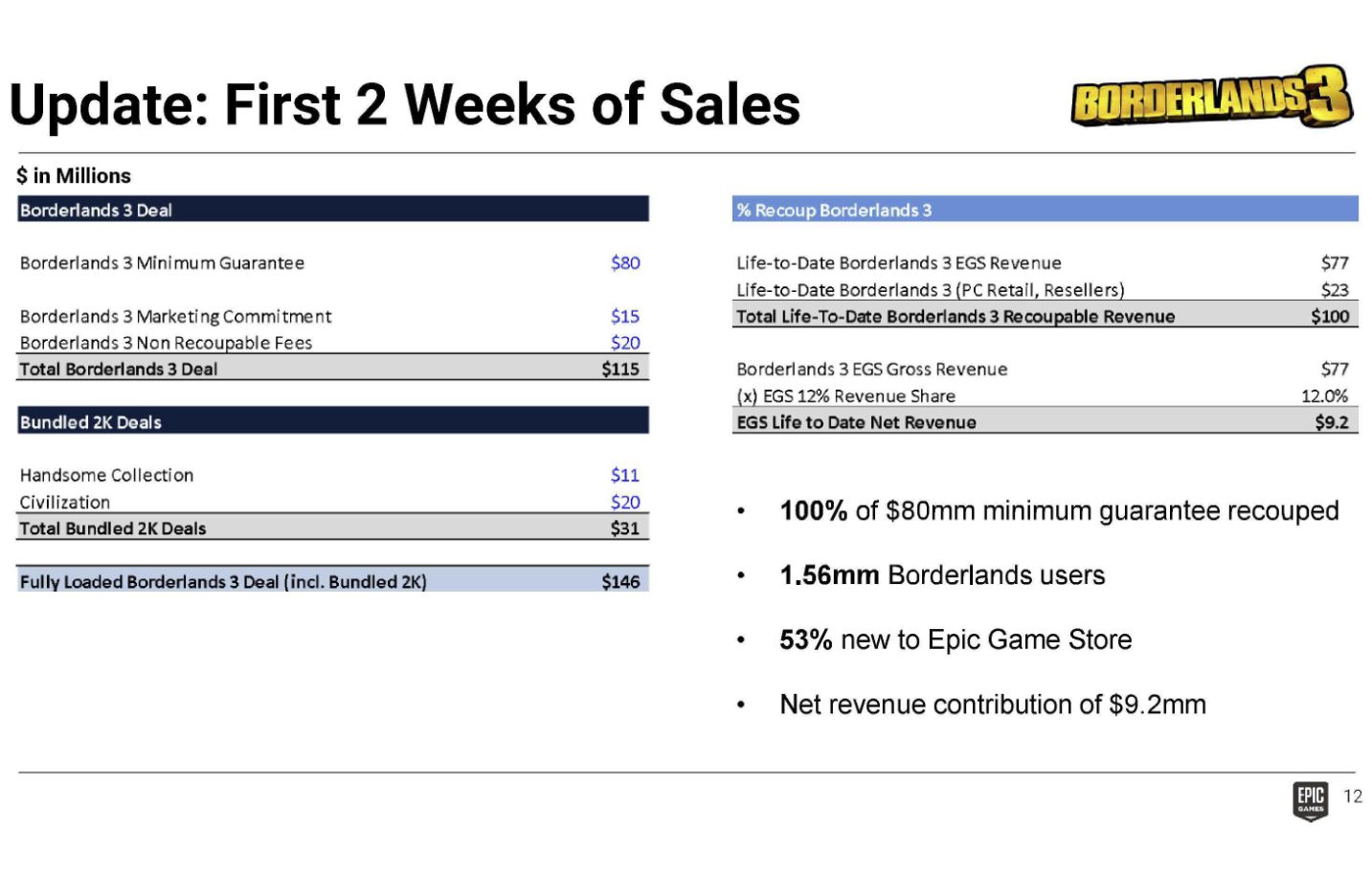 The same document also shows that it was ultimately a well-calculated move on Epic’s part, because the game was a success. By October 2019 (two weeks into the game’s release), Borderlands 3 had earned $100 million in revenue on PC, broken down to $77 million in direct sales on the Epic Games Store, and $23 million across PC resellers and retail.

This means Epic’s $80 million bet was a good one, because the game recouped more than that in its first two weeks on sale. Over the same period, EGS’ 12% cut amounted to $9.2 million in net revenue for Epic. 1.56 million EGS users played Borderlands as a result of the deal, and 53% of them were entirely new to the platform.

Although the specifics of this particular case are new, offering developers guarantees to convince them to lock their games to the Epic Games Store for set periods of time has been a core component of Epic’s strategy to build its user base. It has so far cost Epic more than $444 million – something CEO Tim Sweeny is okay with – on the company’s quest to expand the store’s reach.

As part of Monday’s proceedings, Sweeny also said he doesn’t expect the Epic Games Store to be profitable for another three or four years.