Fortnite Chapter 2 Season 7 is nearing its end, but there’s one last hurrah before the latest Battle Pass expires on September 13. Operation: Sky Fire is about to begin, and that means Battle Royale fans will soon participate in the next major live event within Fortnite. But what will it entail? When and how can players join what should be a final fight against the alien invaders? If the latest details are anything to go by, this event is sure to be a doozy.

When is the Fortnite Operation: Sky Fire live event start date and time?

The Fortnite Season 7 live event starts Sunday, September 12, at 4 p.m. Eastern. While Epic has yet to reveal precisely how long Operation: Sky Fire will last, almost all past Fortnite live events have taken about 15 to 20 minutes to complete. However, there are certain elements about this particular event that may make its rollout a little different from what we’ve seen before.

In order to make sure you can see the event as it happens, you should log in to Fortnite by at least 3:30 p.m. Eastern on September 12. At that time an Operation: Sky Fire queue will become available that allows squads to reserve their seat for the event. There are no replays for this event, so make sure you have ample time to hop online if you want to enjoy the gameplay from your perspective.

What are the Fortnite Operation: Sky Fire live event leaks?

Given that Operation: Sky Fire is a major live event that Epic is likely working very hard to keep under wraps, most of what we know about it comes from official teasers released by Epic itself.

The first teaser can be seen in-game by scrolling over to the “Season End Event” tab on the news page. It reads “backpacks are charged and ready for action. Prepare to infiltrate the Mothership and deliver the IO’s final message.” Most folks will likely understand that Season 7 has largely focused on the inhabitants of Fortnite Island’s clash with an alien faction called the Last Reality. According to this teaser, it appears one method Slone and the others will use to gain the upper hand is to attach small, round objects to the bottom of floating PoIs. 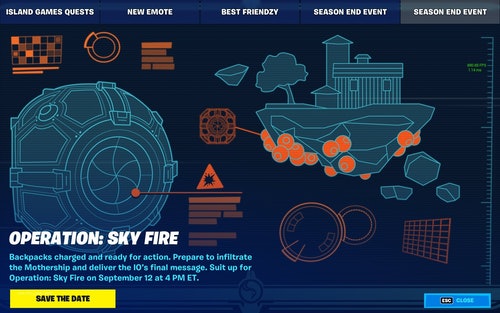 These objects could very well be bombs, or they may have some means of counteracting the gravitational force keeping these gigantic landmasses afloat. Either way, they are a key part of some sort of chain reaction that will presumably take the Mothership down.

The second teaser is equally as revealing, showing what looks like the backpacks referenced in the in-game news post. The graphic suggests players will attach these jetpacks to their backs to reach the Mothership and then take them to a marked location on the right-hand side of the saucer. There’s also a winding map that presumably illustrates the ship’s interior. 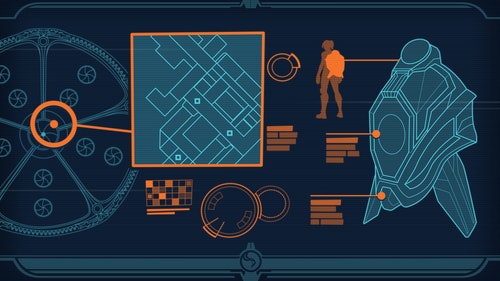 In a lot of ways, these two images paint a clear picture of what squads will be doing once the event’s start time arrives, but other leaks offer a few more hints.

Once inside the Mothership, data-mines hint that players will head to some sort of prison-like area with a bunch of holding cells. You can see it in this short video below from ŠHØØT2K1ŁŁ.

READ  To Xfinity and Beyond

Another leak worth paying attention to from Reddit correctly predicted last month’s Ariana Grande concert and Suicide Squad collaborations weeks in advance. That post mentions Kevin the Cube will return at the end of Season 7, and, since we haven’t seen him yet, one can assume he might have something to do with the event if this leak continues to be accurate.

His part in this story would make sense given that the floating islands exhibit many cube-like properties in that they shroud the surrounding location in purple energy and make everything bouncy. But, because Kevin is central to the power of the Zero Point that governs the Fornite island, destroying anything in his vicinity could have colossal consequences.

Given everything we know, our best guess is that this event involves players using jetpacks to float up to the Mothership. Once inside, we’ll head to the prison-like area to plant some bo,bs. After everything is attached, Slone will trigger a detonator designed to activate the devices under the islands, causing a chain reaction that blows up the Mothership. What Slone doesn’t know, however, is that Kevin the Cube has been powering the aliens’ efforts. Having just inadvertently impacted the steward of the Zero Point, the Fortnite island will be plunged into several hours of darkness, paying the way for server downtime heading into Season 8.

How accurate is this? We’ll find out soon enough.

Nioh: The Complete Edition and Sheltered are free on the Epic Games Store